I am thankful to say that my Kannada CD recording is behind me at last!  The Lord laid this project on my heart at the beginning of the year, and it was one of my project goals, in a sense.  There were many obstacles that came up between then and now, but the Lord had the victory in this recording despite it all!

This week I will take care of ordering the hardcopies and cases.  It is certainly a different process here than in the States.  It has been a good learning experience.  However, like I already said, it feels good that the hard work is done.  I spent months selecting and practicing the songs.  I feel like I can finally breathe now!

I am about twenty weeks along with the new kid, so we’ll be going in for the anatomy scan this week.  Praying for a healthy report!  To answer the question that many of you may ask: no, we won’t be finding out the gender this week.  In India it is against the law for the doctors to tell the baby’s gender because here many people will abort the baby if it is not the gender they want.  Unfortunately, this is not because India is against abortion, but mainly because they want to keep the male and female ratio balanced.  Abortion is common here, especially when people find out they’re expecting a baby that they think they cannot afford. ☹

In two months we will be back in the States, which is so crazy.  This past year has flown by!  We have much to do in the next several weeks.  We are excited that Zack’s parents, his two youngest siblings, and a dear friend who is like family are coming to visit in September.

Zack stumbled upon a swarm of honeybees the other day while cutting some trees and he was able to capture it and place it in a box.  We’re hoping the bees decide to stay put so that Zack’s dad can have a look at them when he’s here (Zack grew up on Indian Summer Honey Farm, a business started by his parents).  The honeybees that Zack caught are of the Apis Indica variety.  They are native to India and though they are more docile than the European bees we work with in America, they are quite sensitive.  If you mess with them too much, they will just fly away.  It is fascinating to learn about their different personality.

In closing I will share a picture I took this week while we were doing family devotions.  Normally we have the kids sit facing us with their hands folded while Zack reads the Bible story.  However, on this particular day, everyone just wanted to sit with dad.  I love their sleepy little faces and Thaddeus’ cheesy smile.  What a great way to start the day! 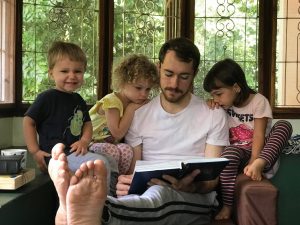 Your cart is empty
Visit The Shop